Starting with the release of the Pixel 3, all of Google’s Pixel Android smartphones come with the Titan M security chip on board. When I realized the Pixel 3a XL I purchased also had it, I decided to try to take advantage of it in an app I work on. It turned out that using the Titan M chip through the Android Keystore API for AES-GCM in a specific way lead to predictable and bogus ciphertext. This is the story of how I stumbled upon that bug, and why it’s a bit mysterious.

Let’s start with a short high-level primer on the Android Keystore and StrongBox before we jump into this. If you’re already familiar with these two concepts, you can skip ahead to Discovering the bug.

The Android Keystore is a system service that allows apps to securely generate and use cryptographic keys. While apps can use the keys they generated, they cannot extract them, as they never enter the process of the app. The idea behind this, is that even if the process of the app is compromised, the key is not.

The practical security of this system varies across devices, as the Android Keystore can have various kinds of “backings”. Some devices simply keep the whole system in Android itself, while other devices come with a TEE. Some even come with an entirely separate chip to back the Android Keystore with. The latter offers the best security, because even if an attacker is able to compromise the operating system, they would still need a vulnerability in the HSM to get to the keys in the Android Keystore. The fact that these chips are shipping in more and more smartphones these days is a pretty exciting development, if you ask me.

StrongBox and the Titan M chip

An Android Keystore implementation that falls under the latter category is referred to as a StrongBox Keymaster, and the Titan M chip is one of them. To take advantage of it in an Android app on Pixel devices, one has to indicate a preference for StrongBox during key generation. By simply calling setIsStrongBoxBacked(true) on the KeyGenerator instance, apps that use the Android Keystore get more secure storage for their cryptographic keys, with no apparent downsides. That’s what I thought, anyway.

I work on a 2FA app for Android, Aegis Authenticator. The app stores the OTP secrets in an encrypted file (referred to as the vault). The master key used to encrypt/decrypt the vault is managed by a key slot system that’s very similar to LUKS. You can learn more about it here. In short, Aegis has the concept of two types of key slots: for a password and for biometric authentication. The biometric key slot encrypts the master key with a key stored in the Android Keystore, so that the master key can be decrypted after successful biometric authentication by the user.

Here’s what the key generation code for that looks like in Aegis. Excerpt from KeyStoreHandle.java:

It generates a 256-bit key, to be used with AES in GCM mode, for encryption and decryption. User authentication is required for this key, so that it can only be used after biometric authentication by the user.

This works fine. Let’s switch this over to StrongBox.

To test this change, I went through Aegis’ setup process, set a password and enabled biometric unlock. The main view opened and I could start adding tokens. So far so good. However, when I closed the app, reopened it and tried to unlock the vault with biometric authentication, the app showed an error dialog, caused by the following chain of exceptions:

Huh. Decryption of the key slot fails, because apparently verification of the MAC failed. How could that be? We only added a single line to enable StrongBox and left the rest of the code alone. I would have attached a debugger at this point to see what’s going on, but that’s not very useful here, as we can’t see what is going on in the HSM, where the cryptographic operation takes place.

After a couple of more tries, it turned out that the kind of exception I was getting was not consistent. If I waited a couple of seconds before authenticating after the biometric prompt was shown, I got an entirely different exception:

At this point, I decided this issue may be worth reporting to Google through the Android Security Rewards Program. In an attempt to get a better grasp on what the issue actually is, I wrote a small configurable PoC app that demonstrates the issue to go along with the report. It is open source and available on GitHub. It has gone through a few iterations since the initial report to Google. The screenshots below show the latest version. 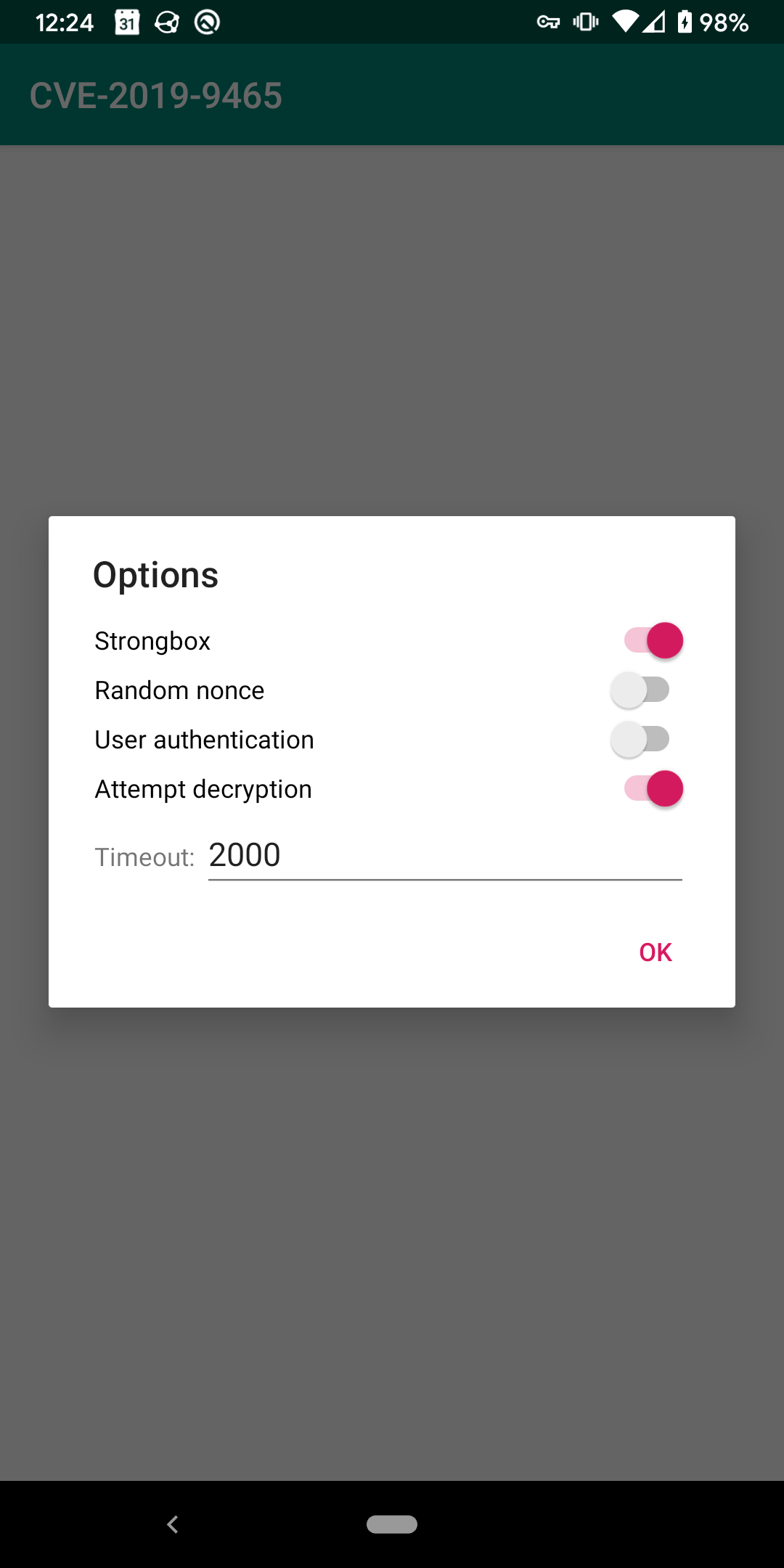 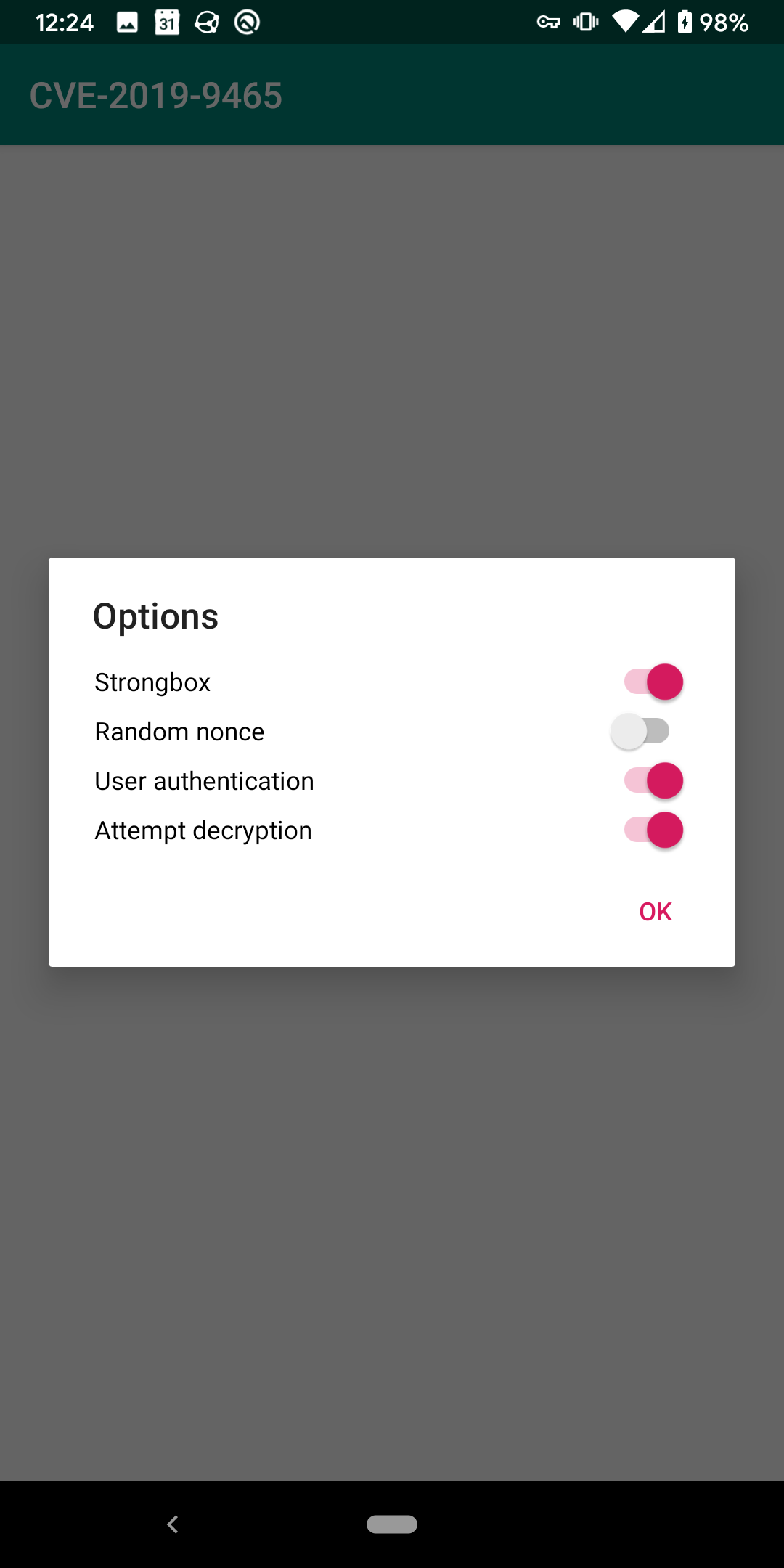 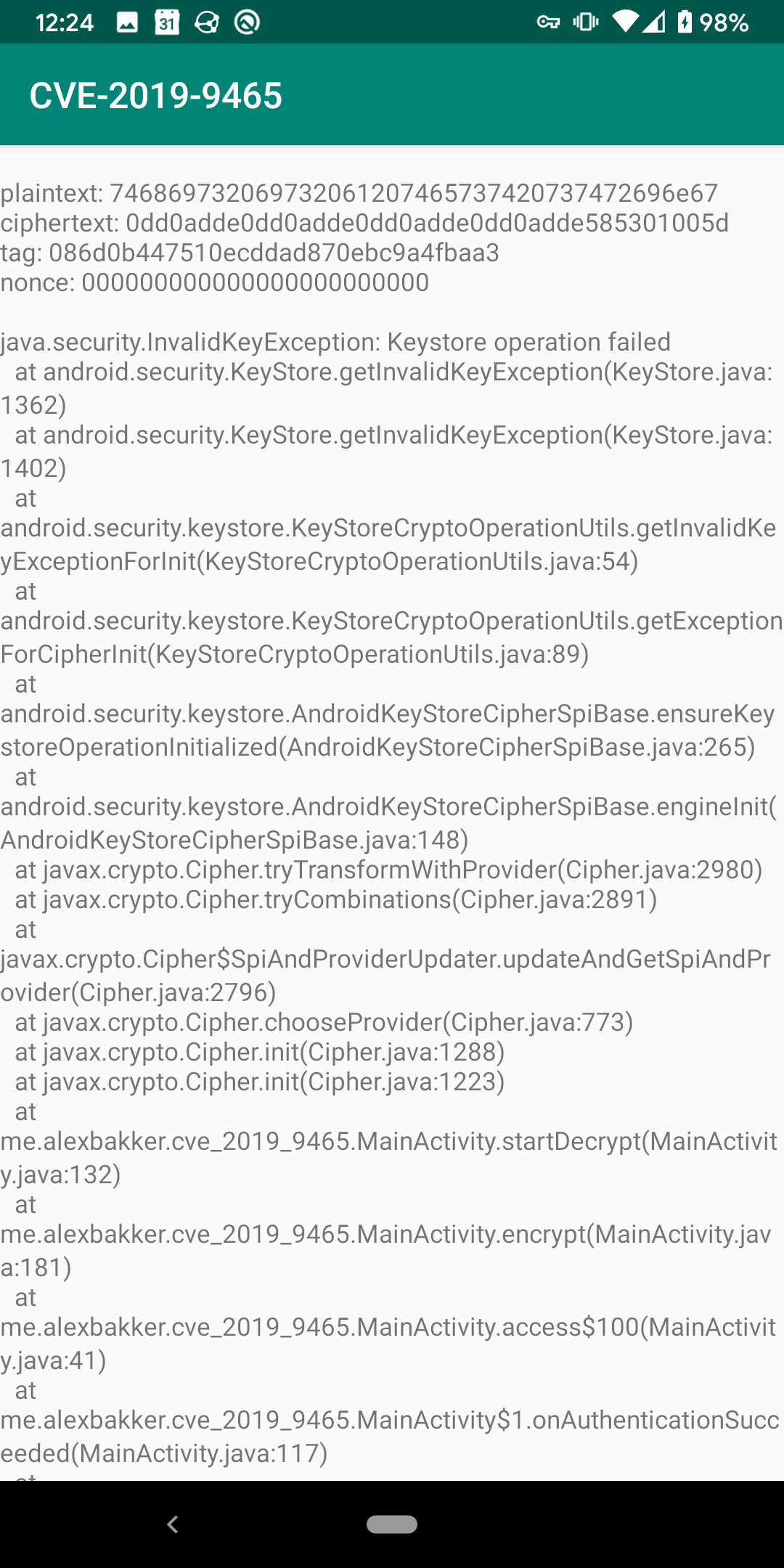 The app sits in a loop, repeatedly encrypts/decrypts some hard coded plaintext and prints the results to the log. As shown in the screenshots above, user authentication, the timeout between tries and some other things are configurable in the options dialog. While we can’t see what going on inside the HSM, this gives us a good look at the behavior we can see on the outside. Looking at the log, it turns out that this bug causes cryptographic operations to produce predictable and bogus ciphertext:

No matter how many times this is repeated, the resulting ciphertext is always the same (while the nonce is always different, even). Now it’s obvious why decryption failed in Aegis before. Trying to decrypt bogus ciphertext like that will certainly result in a MAC verification failure and bogus plaintext. The most dangerous thing about this, is the fact that it fails so spectacularly without throwing an exception. This also completely defeats one of the most important guarantees that symmetric ciphers provide: ciphertext that is indistinguishable from random noise.

Playing around with the app some more, I concluded that waiting ‘too long’ (around 2 seconds) between cipher initialization and using it to encrypt/decrypt something elicits this behavior. This appears to only be an issue with AES in GCM mode. I also tested the other supported ciphers and modes, but those seem to behave correctly.

Unfortunately, this is where my research grinded to a halt. To go further I would need access to the firmware that is running on the Titan M chip, to see what might be going wrong there. While Google has promised to open source the firmware, it has not delivered on that promise to this day. My best guess would be that this is a memory corruption issue, but that’s about as far as I’m going to get without more access. Google doesn’t seem to be willing to discuss the details of the issue either, as you’ll notice while reading the Timeline.

I also took a quick look at the Android source tree to see if I could find any places where AES-GCM was used in combination with StrongBox and the randomness of ciphertext was being relied upon. The latter is the case with some CSPRNG implementations, for example, though I can’t think of a reason why someone would use GCM mode for that purpose. That’s the only attack vector I could come up with, but perhaps someone more knowledgeable in Android’s internals can think of something else.

In total, it took 6 months to get this fixed. Here’s the timeline:

A call with Google

After sharing the draft of this blog post with the team, I was asked if I would be willing to join a short call, as they wanted to “provide some details/context about the fix process for this issue prior to the publication” of my blog post. I agreed.

During the call they apologized for the long turnaround time and poor communication. I appreciate that, as that was indeed the main disappointment I had when submitting this as my first Android security issue report. I had to keep asking for status updates and felt like I was being kept out of the loop, while one would expect the team to share new information as it becomes available. The initial draft of the blog post had a fairly snarky comment about the fact that the severity rating changed from Won’t Fix, to High, to Critical. They explained that their guidelines for severity ratings changed while in the process of handling my report and they adjusted the severity rating based on those new guidelines. Fair enough, I removed that comment.

The overall impression I got is that they genuinely care about handling Android security reports well and regret that it didn’t go as well as they would have liked this time around.

Naturally, I also used the opportunity to ask if they could provide some more information about the nature of the actual bug and about the status of open sourcing the Titan M firmware, but they couldn’t comment on that.

I ended up performing a factory reset on my device a few days ago, which seems to have magically fixed the Titan M firmware update issue. The security issue itself also appears to be resolved. I would have loved to try to dig deeper into this, but as said, the source of the Titan M firmware is simply not available. Google appears to have added CTS tests for the exhibited behavior, but other than that, there is no trace of how this bug was fixed.

I also learned some important lessons. Upon initial disclosure to Google, I should have firmly set the standard 90-day deadline, so that it’s clear for all parties what the expectations are. Secondly, despite not setting a deadline upfront, I should have disclosed this publicly much earlier than I ended up doing. It just didn’t feel right to disclose a security issue that I didn’t have a fix or workaround to offer for, but I’ve since come to the realization that getting the information out there is more important.